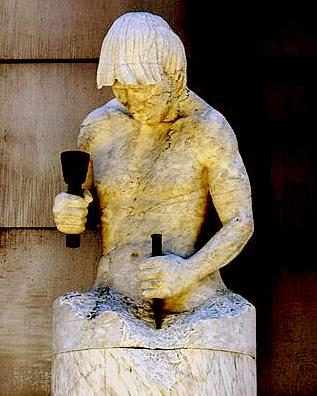 Modern Freemasonry is descended from the ancient guild system of European stonemasons and construction workers. Some aspects of Freemasonry’s modern ritual can be traced back nearly 1000 years. The Freemasons kept their trade secrets secret (primarily mathematic and construction knowledge), as did most guilds such as ironmongers, bakers, and weavers to name a few. This secrecy protected the quality of the guild’s work and ensured job security for its members.

The Freemasons influence peaked during the Renaissance, but declined in tandem with the decline of monumental church architecture in the 16th and 17th centuries. Between the Renaissance and the Enlightenment learned Freemasons (operative members) began accepting non-masons (speculative members) into their ranks as patrons of their art. These “speculative” patrons tended to be men of letters and wise influential statesmen.

The guild of Freemasons transformed into a social and fraternal institution in the 17th and 18th centuries. During this time they used the tools and legends of their trade as metaphors to emphasize internal enlightenment and personal growth among the fraternity’s members. The men within its ranks influenced the development of modern concepts of democracy and personal liberty—ideals that aided the transformation and creation of many western democracies—particularly the United States.

Freemasonry was reputedly established in North Carolina at Masonborough in the mid-1730s. However, the first documented evidence of Masonic activity in the state can be dated to Wilmington and New Bern during the early 1750s. In 1771 the Duke of Beaufort commissioned Joseph Montfort Provincial Grand Master of North Carolina, a post he ably held until his death in 1776. Between Montfort’s death and the end of the American Revolution, the Provincial Grand Lodge of North Carolina essentially ceased to exist, though individual lodges continued to operate. In 1787 several delegates from several lodges across the state met at Tarborough to establish a new Grand Lodge and elected Samuel Johnston as their new Grand Master. The first Masonic lodge established in Raleigh, Democratic Lodge No. 21, occurred in 1792–the same year the city was incorporated and established as the new capital of North Carolina.